48 HOURS OF FAMILY FUN WHEN THEY VISIT 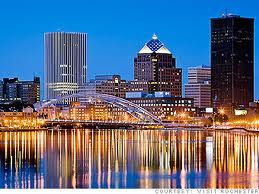 From top-ranked golf courses and national-landmark house museums to a children's emporium of play and America's oldest municipal park-garden cemetery, the city in western New York is crammed with surprises for visitors of all interests.

Its glacier-carved linchpin is a trio of waterfalls trumpeting the Genesee River's thunderous descent into Lake Ontario. Reuters correspondents with local knowledge help visitors get the most out of a short stay in Rochester (pop. 210,855), variously known over two centuries as the Flour City, the Flower City and, less so of late, the World's Image Center.

5:30 p.m. - Dinner at Dinosaur Barbecue, a honky tonk rib joint tucked into a former railroad station overlooking the river. Take in a view of the unstoppable torrent from the adjacent Court Street Bridge before digging in to brisket, cornbread and tomato-cucumber salad.

7 p.m. - Head back across the bridge to Blue Cross Arena for a dash of ice-hockey escapades hollering on the Rochester Americans. For spring and summer alternatives, catch a Rochester Red Wings baseball game at Frontier Field or the Rochester Rhinos soccer team at Sahlen's Stadium.

For people who prefer stage or dance, there's Geva Theatre or an occasional hometown performance by the top-notch Garth Fagan dance troupe.

9:30 p.m. - End the day with a Genesee cream ale or Finger Lakes Riesling and a twirl on the dance floor at one of an assortment of bars and music halls that abound in the lively East End.

9 a.m. - Try yogurt and granola plus an egg Danish - caramelized onions baked in fluffy pastry topped with an egg - at Flower City Bread in the Rochester Public Market. This magnet for bargain food shoppers, situated since 1905 on Union Street in the gritty northeast section, has a ring of casual eateries.

10:30 a.m. - Head to the Genesee River at its most spectacular stretch north of downtown for a peek into the city's water-powered origins. Repurposed factories and remnants of a once flourishing flour industry form a ghostly backdrop to the 90-foot (27.4 meter) cascade known as High Falls.

Among panoramic vantage points above the waterfall and its wide gorge basin are a pedestrian bridge and the rooftop patio of a pub-style restaurant in Genesee Beer and Ale brewery.

For more outdoors adventure, take a short drive north to a path behind Maplewood Park's rose garden that descends close to river level in the nearly 200-foot-deep gorge.

11:30 a.m. - The red-brick Victorian home of women's rights crusader Susan B. Anthony is a highlight among memorials concentrated in upstate New York that extol women's achievements in molding the nation.

Step into the parlor where Anthony was arrested after daring to vote in 1872. The home contains the trademark alligator bag she carried on frequent travels, and the bed she died in after delivering her "Failure is Impossible" speech in Washington in 1906.

12:30 - Cross downtown into the South Wedge neighborhood for lunch at Mise en Place, a modest grocery-cum-diner with window tables looking out at a string of rib restaurants, pubs and bakeries along South Avenue. Cheesy Eddie's is a stalwart for cheesecake, while newcomers include The Little Bleu Cheese Shop and Hedonist Artisan Chocolates and Hedonist Artisan Ice Cream.

Search out the only full-size Italian Baroque organ in North America, a 600-pipe, fully restored instrument built around 1770 that is played at periodic recitals by students at the acclaimed Eastman School of Music.

Children in tow? A popular alternative is The Strong, the second-largest museum devoted to children in the United States. Among dozens of interactive educational exhibits are a butterfly garden, a streetscape from television's Sesame Street and a whaling ship. 3 p.m. - Stroll from the art gallery along University Avenue. Dawdle over coffee or antiques at the Flatiron building or photo art at Image City Photography Gallery.

3:30 p.m. - The walk extends to George Eastman House, the world's oldest museum of photography and motion pictures with an archive of 400,000 images stretching back to 1830s daguerreotypes.

View old cameras, famous original photos and film reels at Eastman's majestic 1905 Colonial Revival mansion and villa-style gardens. The patriarch of popular photography, Eastman founded Eastman Kodak Co, which ruled the world of film photography for over a century but has been brought to its knees by a swift shift to the digital technology it helped pioneer but couldn't capitalize on.

6:30 p.m. - For a cut-above meal, try the restaurant Good Luck. Its tapas-style dishes are meant to be shared, from red lentils to smoked pork shank.

9 p.m. - Head to The Little for an indie, foreign or art film in a funky 1929 Art Deco theater on East Avenue.

8:30 a.m. - Start the day with French toast or Eggs Benedict at The Frog Pond in the fashionable Park Avenue district.

10 a.m. - On the edge of downtown is Mount Hope Cemetery, a 196-acre arboretum favored by dog walkers, history buffs and curious souls. A classic example of a pre-Civil War "rural cemetery," Mount Hope is a heavily wooded jumble of ridges, ravines and meadows with gravestones and mausoleums set amid fountains, ornate sculptures and stone terraces fringed with wildflowers and pines.

11 a.m. - Across the street, stroll through Frederick Law Olmsted-designed Highland Park, famous for its lilac bushes and a floral, food, art and musical festival in May that serves as the true advent of spring in a city where snowfall tops 100 inches in a typical winter.

1:30 p.m. - Tee off at one of the Rochester region's 90-plus golf courses to get a feel for the undulating, tree-framed terrain the world's top golfers will encounter at two majors here this year: the PGA Championship at Oak Hill in Pittsford on August 5-11. Travel Postcard: 48 Hours in Rochester, New York