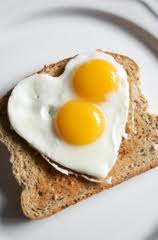 Thought eggs were bad for you? Not so fast. New research is providing different answers.

(TAH) – It turns out a component of egg whites — already popular as a substitute for whole eggs among health-conscious consumers concerned about cholesterol in the yolk — may have beneficial effect in reducing blood pressure.

“Our research suggests that there may be another reason to call it ‘the incredible, edible egg,’” said study leader Zhipeng Yu, Ph.D., of Clemson University. “We have evidence from the laboratory that a substance in egg white — it’s a peptide, one of the building blocks of proteins — reduces blood pressure about as much as a low dose of Captopril, a high-blood-pressure drug.”

Yu and colleagues at Clemson used a peptide called RVPSL. Scientists previously discovered that the substance, like the family of medications that includes Captopril, Vasotec and Monopril, was an angiotensin-converting-enzyme (ACE) inhibitor. It has a powerful ability to inhibit or block the action of ACE, a substance produced in the body that raises blood pressure.

They set out to further document RVPSL’s effects, using laboratory rats that develop high blood pressure and are stand-ins for humans in such early research on hypertension. The results of feeding the substance were positive, showing that RVPSL did not have apparent toxic effects and lowered blood pressure by amounts comparable to low doses of Captopril.

“Our results support and enhance previous findings on this topic,” Yu said. “They were promising enough to move ahead with further research on the effects of the egg white peptide on human health.”

Yu noted that the research was done with a version of the peptide that was heated to almost 200 degrees Fahrenheit during preparation —less than the temperatures typically used to cook eggs. He cited evidence from other research, however, that egg whites may retain their beneficial effects on blood pressure after cooking.

Yu believes that egg white peptides, either in eggs or as a supplement, could become useful as an adjunct to high-blood-pressure medication. For now, he said people with high blood pressure should consult their health care provider before making any changes. And he noted that findings about egg white and high blood pressure add to the emerging nutritional image of eggs.

Once regarded as a food to avoid in a healthy diet, studies in recent years have concluded that many people can eat eggs without raising their blood cholesterol levels, benefiting from an inexpensive food low in calories and rich in protein, vitamins and other nutrients.