IS POPCORN A HEALTH FOOD? 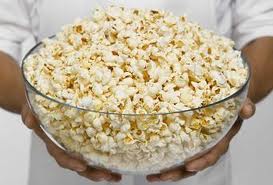 Popcorn Is Packed with Antioxidants Don’t discount the health benefits of popcorn — it’s full of fiber and, according to a new analysis, antioxidants too.

Not quite, but according to a new analysis, you shouldn’t be so quick to dismiss its nutritional benefits. Presenting research at the American Chemical Society meeting on Sunday, Joe Vinson, a professor of chemistry at University of Scranton, reported that popcorn may contain just as many healthful antioxidants — or even more, depending on how you measure them — as fruits and vegetables.

Antioxidant compounds called polyphenols, which have been associated with combating cancer, are commonly found in produce. Vinson and his colleagues also found it in popcorn, by grinding up the popped kernels, including the waxy hulls, and simulating the digestion process that would normally occur in the stomach. About 1.5% by weight of air-popped popcorn is made up of polyphenols, the researchers found (the good-for-you compounds are also present in red wine and chocolate)

As snack foods go, popcorn isn’t a bad choice: about two tablespoons of kernels, or 33 g of popped corn, would give you about 500 mg of polyphenols, which is about half of what the average American consumes in polyphenols each day — primarily from fruit juice, wine, tea, coffee and chocolate. Per unit weight, Vinson’s team found, popcorn contained more polyphenols than fruits like pears and apples, with most of the health benefits packed into the hulls, not the fluffy white part.

Since popcorn is 100% whole grain, it’s also a good source of fiber, and as long as you air-pop it and don’t douse it in butter, oil or salt, it won’t add much artery-clogging fat to your diet.

But the findings aren’t license to substitute popcorn in your diet for fruits and vegetables, says Vinson. For one thing, comparing the foods’ concentrations of polyphenols by weight is a little misleading, since fruits and vegetables are made up primarily of water, while corn kernels have very little water — that might account for the discrepancy. Further, produce has a lot of other nutritious vitamins and minerals that you don’t get from popcorn. Plus, the way many people consume popcorn — think butter-laden, salted movie popcorn — isn’t exactly healthy.

Still, Vinson says, the results show that when prepared right, air-popped and undressed, snacking on popcorn isn’t such a bad idea.