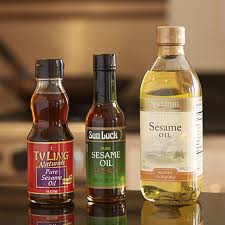 A study finds cooking with a novel ingredient has significant health benefits
People who cook with a blend of sesame and rice bran oils saw a significant drop in blood pressure and improved cholesterol levels, according to new research The researchers found cooking with a combination of these oils in a variety of ways worked nearly as well as a commonly prescribed high blood pressure medication, and that the use of the oil blend with medication yielded even more impressive results.

The 60-day study in New Delhi, India, divided 300 people with mild to moderately high blood pressure into three groups. One group was treated with a commonly used blood pressure lowering medication called a calcium-channel blocker (nifedipine). The second group was given the oil blend and told to use about an ounce each day in their meals. The final group received the calcium channel blocker and the oil blend. 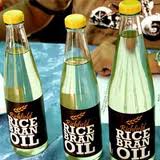 Healthier fatty acids and antioxidants, such as sesamin, sesamol, sesamolin and oryzanol, in the oil blends may be responsible for the results, researchers said. These antioxidants, mono and poly unsaturated oils are compounds found in plants and have been linked with lower blood pressure and total cholesterol in earlier studies.

Additional studies are needed to determine if the oil blend is as beneficial as it seems. The combination was made specifically for this study, and there are no plans to market it commercially. Unfortunately, researchers say that blending these oils yourself would not necessarily produce these effects.

People with high blood pressure should not stop taking their medications and should speak with their doctors before trying any product that might change their blood pressure to ensure they’re being properly monitored.

The study was sponsored by the American Heart Association